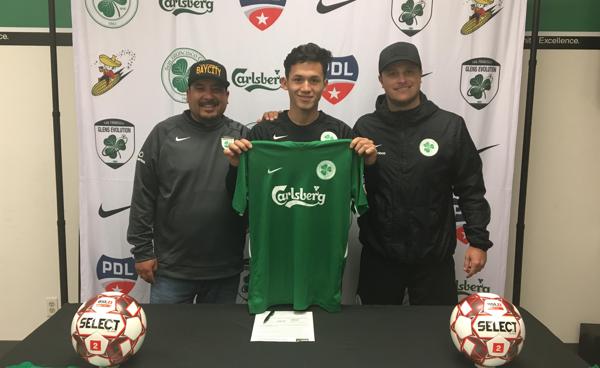 González Ponce, the reigning San Francisco Examiner High School Boys’ Player of the Year after notching an astonishing 44 goals the past two seasons, agreed to a one-year contract pending league and federation approval.

“We’re really excited to sign Julio,” said Glens team president and executive director Mike McNeill. “Our mission with the Glens is to be a club for everyone, and we feel fortunate to have a USL League Two team at the top of our pyramid. It makes our club unique and gives us the ability to bring the best young players from all over San Francisco together to unite under one banner and test themselves to the limit.”

“I’m proud to see ‘Julito’ make the next step in his soccer career,” said Antonio Medina, Bay City founder who doubles as a youth coach in the Glens’ Celtic Academy. “He’s such a great kid on and off the field, so he deserves this opportunity.

“Unfortunately, a lot of kids from the inner-city in his situation never do. That’s why I’m so happy that Bay City and the Glens’ communities have come together, to offer all kids in San Francisco a legitimate pipeline to the next level.”

A speedy forward who can also play the wing, any questions whether González Ponce could play against grown men were answered when he entered the second half of the Glens’ preseason game against Academy of Art University last Friday and immediately tallied a goal and assist.

“I felt really comfortable here, so I’m happy to sign with the Glens,” González Ponce said. “I want to use this opportunity to thank everyone for believing in me here in San Francisco and back in El Salvador. I want to make everyone proud, so I’m going to work my hardest.”

Glens head coach Javier Ayala-Hil is cognizant of González Ponce’s situation; his mother also left El Salvador to seek a better life in the United States. Growing up in East Palo Alto, Ayala-Hil had similar obstacles getting seen by college coaches as a player before landing at Cal, which offered him a springboard to the professional ranks at Chivas USA and Germany.

“We are happy to have one of the best local talents join us this season,” Ayala-Hil said. “It’s very well-deserved after such a successful career at Mission High School.”

Another person ecstatic to see him sign with San Francisco is his high school coach and former Glens first-team midfielder, Jose Mendoza Jr., who steered Mission to both a league title and their first Northern California championship in school history this past season. Mendoza’s family has deep ties with the Glens, as his little brother Max is a youth player and his father Jose Sr. is a coach in the club’s Celtic Academy.

“I’m definitely proud of him. He’s been a crucial part of the team,” Mendoza said. “He just always knows where the goal is, and he’s one of the best players in The City. I’m glad to see him working with Javi to show what he’s got and continue to get this type of exposure. We’re hoping in the future that we have a lot more guys like Julio coming from our program, too.”

Now if only he can get the days off. In addition to taking a curriculum at Mission that includes Advanced Placement and honors courses, González Ponce has been busy working two jobs as a busboy in the Mission to help support his family in San Francisco and sends whatever money is left back to El Salvador.

“It’s hard to balance everything,” he said, ”but I’ve been doing what I can to help my family. I’m just happy for this opportunity, and that Javi and the club believe in me. Up the Glens!”

The Glens conclude their preseason schedule on Saturday, April 27, when they host the San Jose Earthquakes at Skyline College at 5 p.m. The Quakes will be sending a mix of reserves and their Under-19 players led by coach Eder Quintanilla. Admission will be free.

Over 70 percent of all MLS SuperDraft selections since 2010 have USL League Two experience, including four from the Glens in 2019 (Sam Junqua, Roy Boateng, Shinya Kadono, and Sam Ebstein—the first San Francisco club to ever have that many picked. Among the many players to have played in USL League Two before making their professional debuts include Newcastle United FC defender DeAndre Yedlin, 2017 MLS Goalkeeper of the Year Tim Melia, 2017 MLS Defender of the Year Ike Opara, 2018 MLS Rookie of the Year Corey Baird, and U.S. Men’s National Team members such as Darlington Nagbe, Brad Guzan, Geoff Cameron, Josh Sargent, and the Bay Area’s own Nick Lima.