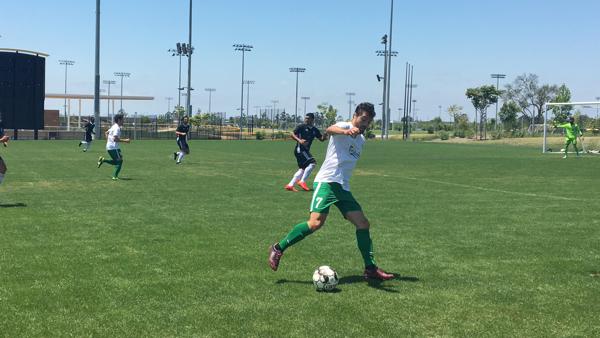 IRVINE, California — The San Francisco Glens demonstrated the type of two-way force they could be in the first 45 minutes against the host Orange County SC Under-23 last Sunday.

Unfortunately, a weary squad running on fumes at the end of a road trip conceded a late goal off a deflection and the two clubs split the points in a 1-1 draw.

Led by Thomas Quinn Law Man of the Match Diego Lopez and a dominant midfield, the Glens controlled the first half. Marco Iubel continued his torrid scoring pace as he smashed home a Rei Dorwart service from the right wing in the 17th minute to give the Glens an 0-1 lead and earn Carlsberg Man of the Match honors.

The Glens would then miss the first two golden opportunities to double their lead in the 40th minute when Julio Gonzalez Ponce beat Orange County keeper Paulo Guerin down the right wing, but his subsequent attempt for the near post hit the side netting.

Minutes later, Dorwart drew a foul in the box to give Iubel a penalty kick. However, his attempt was thwarted by a diving Guerin and the Glens headed into the break with the slimmest of leads.

San Francisco could not replicate its offensive prowess in the second half despite the continued stellar play from Lopez, and the hosts began to assail the net to no avail at first.

Finally, after several failed barrages, Victor Onofre floated a ball toward goal in the 78th minute that deflected off a defender and over the outstretched arm of Glens goalkeeper Andrew Konstantino for the equalizer.

Both teams had their moments late but could not find a decisive goal before the final whistle. While San Francisco earned their first point after two defeats to open the campaign, they were left wanting more.

"We probably deserved more than what we got," said Glens technical director Jimmy Conrad in the Coach's Corner presented by Rubica. "... But what's most exciting for us as a coaching staff is that we've seen progress in every single game, and that's going to set us up for success in our home opener."

On Friday at 6 p.m., the Glens take on the Santa Cruz Breakers at Boxer Stadium. Tickets are $10 for adults and $5 for youth, and can be purchased at sfglens.com/tickets or at the door. SF Glens Evolution youth club members get free admission by showing their Youth Season pass at the door or by wearing their SFGE jerseys.

Over 70 percent of all MLS SuperDraft selections since 2010 have USL League Two experience, including four from the Glens in 2019 (Sam Junqua, Roy Boateng, Shinya Kadono, and Sam Ebstein—the first San Francisco club to ever have that many picked. Among the many players to have played in USL League Two before making their professional debuts include Newcastle United FC defender DeAndre Yedlin, 2017 MLS Goalkeeper of the Year Tim Melia, 2017 MLS Defender of the Year Ike Opara, 2018 MLS Rookie of the Year Corey Baird, and U.S. Men’s National Team members such as Darlington Nagbe, Brad Guzan, Geoff Cameron, Josh Sargent, and the Bay Area’s own Nick Lima.