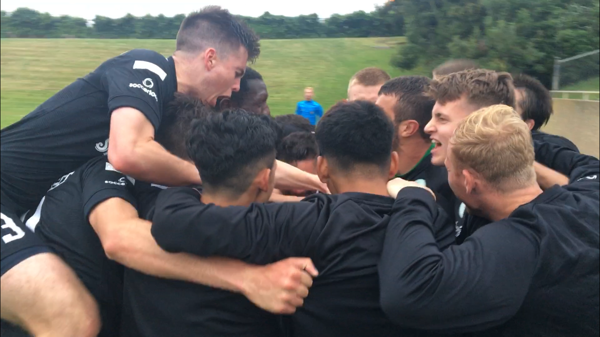 SAN FRANCISCO — With two minutes left in regulation and the San Francisco Glens looking at their fourth straight draw, two homegrown heroes combined to lift their team to victory.

Steve Cordova intercepted a pass and split the defense with a delivery of his own to winger Rei Dorwart, who found the back of the net to give the Glens a dramatic 1-0 win over the Southern California Seahorses at Boxer Stadium.

“It was a cheeky pass, but I’m a cheeky guy,” said Cordova, who attended The City’s Burton High School. “Sometimes with the number 9 position—the center forward—isn’t about scoring goals. You have to facilitate for others.”

Dorwart, who graduated from nearby Washington High School, gave his perspective on the game-deciding goal, which gave the Glens their first win of the season but also extended their unbeaten streak to four after three consecutive draws.

“I was doing a lot of diagonal runs and Steve just found me with a great pass. It’s been frustrating having chances and not being able to finish but this time, I’m glad I finally did.”

The breakthrough, which was named Carlsberg Play of the Game, was almost short-lived when the Seahorses earned a free kick at the top of the box in the 92nd minute. The attempt was on goal but Glens goalkeeper Javier Santana leaped in the air to bat it away. After the defense thwarted one last salvo from the visitors, referee Turan Ozdemir blew the final whistle.

“It looked like it was going out, but at the last second it dipped, so I had to react to it instinctively,” said Santana, who shared Man of the Match presented by Thomas Quinn Law honors with Dorwart. “I’m just glad I got to it.”

Though the Glens dominated the majority of the game, the Seahorses put together a few chances as the second half progressed. But San Francisco—wearing their new “All Black Everything” third kits—would not be denied the three points that had eluded them so far this season.

“More often than not, things have not gone our way,” said Glens head coach Javier Ayala-Hil in the Coach’s Corner presented by Rubica. “The next step was getting the monkey off our back. We gotta continue to put in the work … It feels good to win, and now we gotta get back that win against Santa Cruz we missed out on over here [at Boxer Stadium].”

The Glens begin a three-game road trip on Sunday at 1 p.m. when they take on the Santa Cruz Breakers at Santa Cruz High School. The team will return to Boxer on June 30th against the Ventura County Fusion.

Today, the Glens are open to all and offer a complete club pyramid, with the addition of their USL League Two team in 2018 as the latest evidence of growth on their path to the professional ranks. Along with their youth club, SF Glens Evolution—a U.S. Soccer Development Academy member, USL Academy founding member, and NPL Club status member—the Glens are the largest soccer club in San Francisco, providing all levels of competition to over 70 teams and 1,300 players from micro soccer all the way to the USL League Two team at the top of the pyramid.

Over 70 percent of all MLS SuperDraft selections since 2010 have USL League Two experience, including four from the Glens in 2019 (Sam Junqua, Roy Boateng, Shinya Kadono, and Sam Ebstein—the first San Francisco club to ever have that many picked.

Among the many players to have played in USL League Two before making their professional debuts include Newcastle United FC defender DeAndre Yedlin, 2017 MLS Goalkeeper of the Year Tim Melia, 2017 MLS Defender of the Year Ike Opara, 2018 MLS Rookie of the Year Corey Baird, and U.S. Men’s National Team members such as Darlington Nagbe, Brad Guzan, Geoff Cameron, Josh Sargent, and the Bay Area’s own Nick Lima.