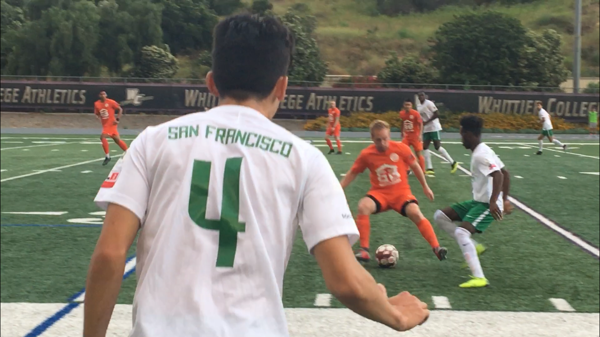 Home is where the heart is for the San Francisco Glens after the team were defeated in a pair of contests this weekend in Southern California.

On Friday night at Whittier College, the Green and White scored the opening goal for the sixth time in eight contests this season, but unfortunately were unable to secure the lead and fell to the SoCal Seahorses, 2-1.

Less than 24 hours later, a weary Glens side decimated by injures gave a spirited effort but fell to the LA Galaxy San Diego Zest at James Madison High School, 1-0.

In a rematch of a game the Glens won 1-0 in San Francisco, forward Steve Cordova opened the scoring thanks to a beautiful assist from Marco Iubel in the 20th minute. Iubel would subsequently leave the game after feeling lingering effects from an elbow he took to the chin moments before the goal.

Now playing without their leading scorer and playmaker, the Glens’ offense was unable to extend their lead, and the Seahorses equalized off a corner in the run of play in the 39th minute.

Southern California then wrested away the advantage 13 minutes after halftime with a second goal. Though the Glens continued to battle and threatened to tie the game numerous times, they fell short of before the final whistle.

Despite playing without Iubel and Cordova for the second of back-to-back games, San Francisco almost pulled out a point in San Diego, but it was not to be.

Glens goalkeeper Dominic Peters kept the team in the contest with a series of highlight-reel saves, but the Zest capitalized on a fortunate bounce in the box to emerge from a maelstrom of bodies and take a 1-0 lead in the 33rd minute.

It was the only offense San Diego needed. The Glens’ attack, led by winger Rei Dorwart and forward Brendan Adame, attempted shots that hit the post several times but could not put one in the back of the net.

The Glens return to San Francisco’s Boxer Stadium for a pair of home games. On Sunday, June 30, at 1 p.m., they face the Ventura County Fusion in what will be the club’s inaugural $2 Beer Day. All beer (Carlsberg, Speakeasy Big Daddy IPA, Speakeasy Prohibition Ale, Corona, and Grimbergen Belgian Amber Ale) is just $2! Visit sfglens.com/tickets for more information.