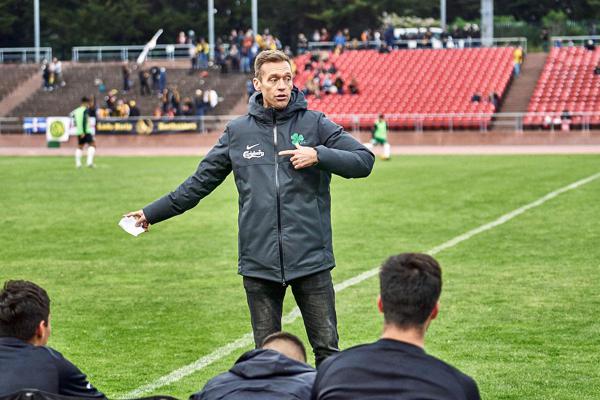 SAN FRANCISCO — The San Francisco Glens have named Jimmy Conrad their head coach for the 2020 season to succeed Javier Ayala-Hil, who laid the groundwork for the club’s first two seasons in USL League Two.

“I’m absolutely excited to be taking over as the head coach,” said Conrad, who served as the Glens’ technical director and head associate coach in 2019. “I learned so much from Javier last season, so I’m excited to apply what I learned and take us forward into the following season.

“It takes a village to raise a person, develop a player, coach a team, so I’m not going to do this by myself. I have so many great people behind the scenes that are helping me and a support staff that’s going to make this upcoming season very special.”

Gabe Saucedo, entering his third season on the Glens’ staff, has been promoted to head associate coach.

“Having Gabe back was really important to me,” Conrad said. “I learned a lot from the experience as technical director last year, not only from Javi but also from Gabe, so I’m excited to work together again.”

Ayala-Hil, who also coached the Glens’ Under-16 team in the NorCal Champions League, decided to step down in order to be able to devote more time this summer to his family, namely his three-month-old daughter, Nina Paloma. Before he left, he had some advice for his successor.

“You definitely have to have thick skin to play in the USL2. It’s not an easy league,” said Ayala-Hil, who is also an assistant coach at the University of San Francisco. “It’s very competitive, but in the end, if you put in the work, everything works out in itself. And I think the Glens have a great foundation for it to be successful this next season.”

“We’re very fortunate and thrilled to have Jimmy take the torch from Javi,” McNeill said. “We appreciate Javi for everything he’s given the club, and we’re confident Jimmy will make his own mark on the position, especially having a year under his belt to learn as head associate coach.”

As one of the most decorated players in American soccer history, Conrad’s individual credentials have very few peers. In 14 years as a pro, He earned 28 caps and starting status for the United States in the 2006 World Cup, as well as the captain’s armband one year later.

The star defender has garnered a plethora of awards on and off the pitch, namely 2005 MLS Defender of the Year, four MLS Best XI berths, six MLS All-Star appearances, and the 2009 MLS Humanitarian of the Year.

But his team accolades are equally worthy of note. Conrad’s bountiful trophy case includes a Gold Cup, an MLS Cup, a U.S. Open Cup, an NCAA National Championship, and even an Under-20 Club Championship. Now the goal is to add his first one from behind the bench.

In an exclusive Q&A session, Conrad discussed the new task at hand and what he hopes to accomplish.

Q: When you first joined the Glens’ staff, many fans wondered why you decided to join the coaching ranks. Now you’re taking the reins from Javi. Why take that step up?

A: I have a big thirst and desire to give back. I’ve learned a great deal during my playing career and post-playing career, and I feel like I have a lot to offer to the next generation. I’m passionate about developing players in this country, and once they get to a point where we can pass them on, giving them opportunities so they can go and hopefully have a better career than I ever had.

Q: You’ve been evaluating potential players for months, and in the upcoming weeks, we’ll be announcing our new signings for the season. What makes a Jimmy Conrad player?

A: I think first and foremost, it starts with commitment. It’s the number one trait I had as a player, and something I look for in the players I want to coach. People that want to be a part of something bigger than themselves, want to be a part of a team that is not always just about them but to see where they fit in.

Q: How do you plan to leave your mark on the club and mold this team in your image as a whole?

A: We talked about commitment and how important that is, but that said, I’m looking forward to continuing the tradition and culture that the Glens have already set up. I’m looking forward to continuing what Javier has put in place these last two seasons. He’s done a lot of great things. I’ve learned a lot from him and the experience. There are some things I can help bring to the table as well, along with what Gabe brings, and hopefully that’s a nice mesh for next season.

Q: You still wear many hats in the media world, from brand ambassador for AT&T, to tournament host for EA Sports, to the face of LaLiga North America. How does that compare to coaching?

A: Like I said, giving back is what I’m really passionate about, even though I’m forward facing in my job with my media duties. I do love some parts of it, getting to travel and see some cool games and meet some incredible people. But I think at the base of me, being a teacher is what I went to school for, and being a coach is just being a teacher. I get to really tap into that. This is a great place for me to be, and I love the Glens Family, so this is a real honor for me to get to be head coach of the team.

The San Francisco Glens are holding open tryouts on Saturday, Feb. 15. Register now as space is limited on SFGlens.com.