The fact that the 2019-20 All-SF Boys' and Girls' High School Soccer Team exists at all is a testament to the rising power of the local prep community.

Now in its second season presented by the San Francisco Examiner and SFGlens.com, the All-SF Soccer Team features an unprecedented eclectic and comprehensive mix of the top high school performers in The City as voted on by a multitude of coaches and athletic directors from all three conferences with San Francisco-based schools—the Bay Counties League (BCL-West and BCL-Central), the California Interscholastic Federation-San Francisco Section (CIF-SF), and the West Catholic Athletic League (WCAL).

The growing popularity of the team is evident in that participation among stakeholders has nearly doubled from the previous season. In fact, the increased number of nominations has resulted in a Third Team and a lengthy Honorable Mention list being added this year. In all, 59 boys and 57 girls will find themselves on the All-SF Soccer Team.

“We want to thank all the coaches, athletic directors, and everyone who contributed to the All-SF Soccer Team for the second straight year,” said SF Glens SC Director of Communications Ryan Maquiñana. “Our initial goal in creating something so unprecedented was to unite the local community in celebrating all our talented high school players and coaches who proudly represent their schools, and to see this response has been overwhelming.”

Another goal driving the establishment of the All-SF Soccer Team was to reflect the diversity in The City, whether one plays for a public or private school. A whopping 25 different schools have at least one boys’ or girls’ player represented.

“Youth players and coaches are the lifeblood of our sport,” Maquiñana added. “Whether they move on to play or coach in college, at the next level like our USL League Two team, or even if this is their last stop, we want to recognize them for continuing the tradition of San Francisco soccer as we collectively seek to lift it to another level.

There will be two polls for each award—one among Coaches and Media for the official winner, and another on SFGlens.com for the Fans’ Choice winner. In the event of a tie in the former poll, the Fans’ Choice poll will be the tiebreaker. You can VOTE NOW through Friday, May 1 at 11:59 p.m. PT.

Originally, the entire All-SF Soccer Team as well as the award winners for Player of the Year, Coach of the Year, and Team of the Year were slated to be honored on the field at halftime of the San Francisco Glens’ USL League Two home opener June 1st at Skyline College. However, due to the COVID-19 crisis, the Glens, as well as the entire Southwest Division, have unfortunately elected to withdraw from the 2020 season.

“While we’re disappointed that the USL League Two season has been canceled, these are also undoubtedly tough times as well for youth soccer players everywhere, especially our high school seniors, who are missing out on some memories that will be hard to make up down the road,” Maquiñana added. “We hope this celebration of their accomplishments will bring something positive to their day amid this quarantine. With regard to making up the canceled ceremony, we will explore other way to honor the winners.”

The Glens would like to thank our partners Target, First Republic Bank, Powerade, Sports Basement, Rubica, and Thomas Quinn Law for helping make the All-San Francisco Teams a reality, and we look forward to doing it even bigger next year!

Without further ado, we are proud to present the 2019-20 All-SF Soccer Team!

VOTE FOR THE ANNUAL AWARDS THROUGH FRIDAY, MAY 1!

NOTE: Due to the large volume of nominations, the poll was separated into three categories: defender, midfielder, and forward. Therefore, having multiple players at one position on one team, e.g., central attacking midfield, could result in other players appearing slightly out of position on the graphic. 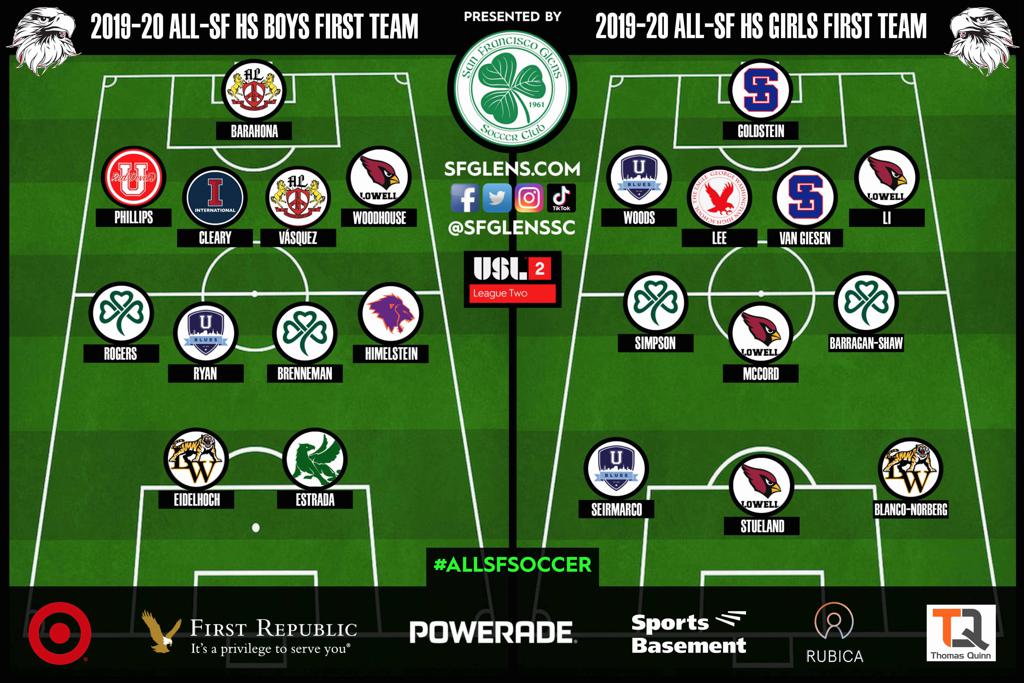 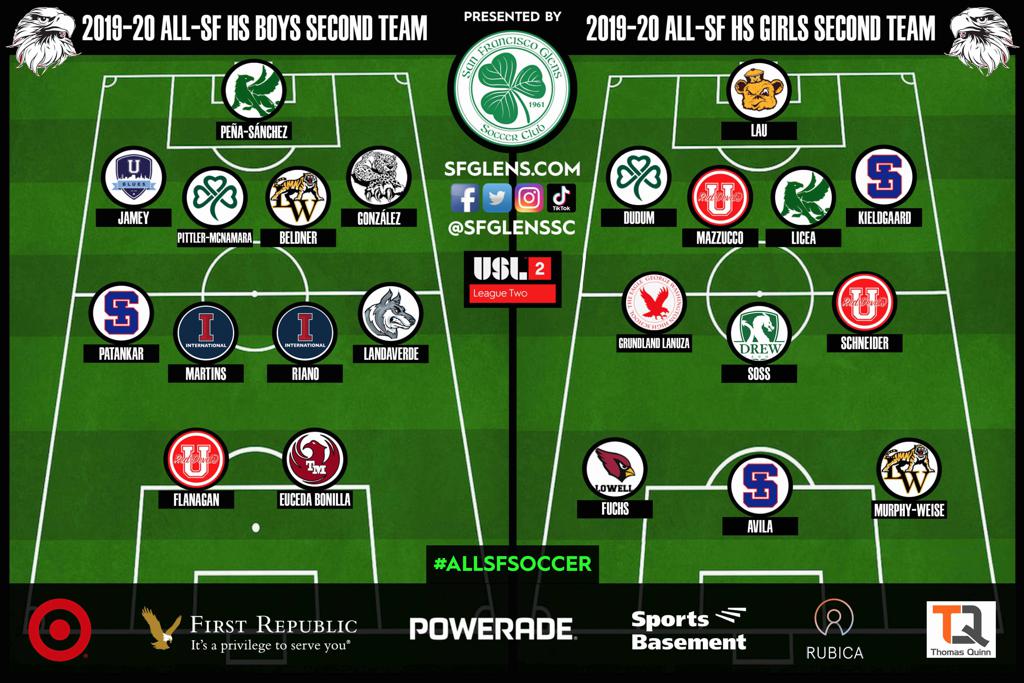 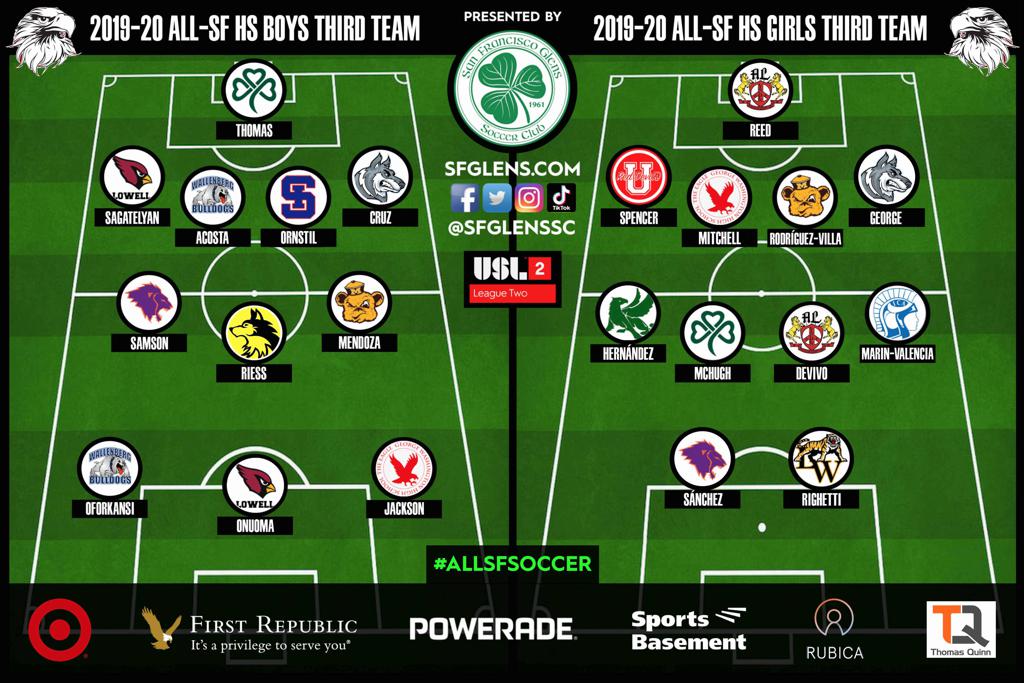 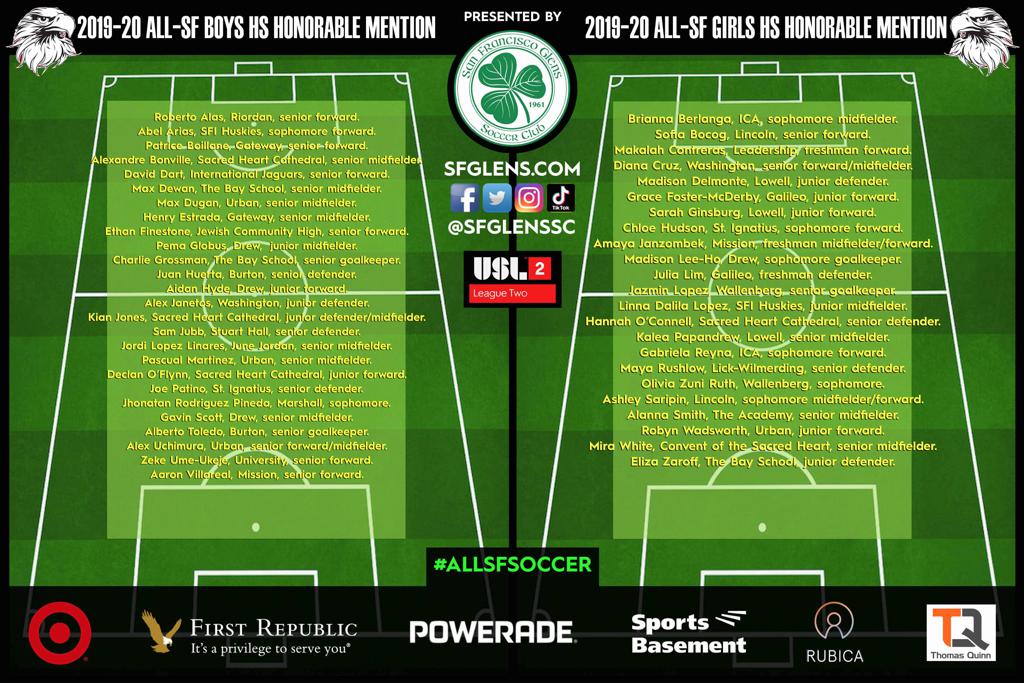 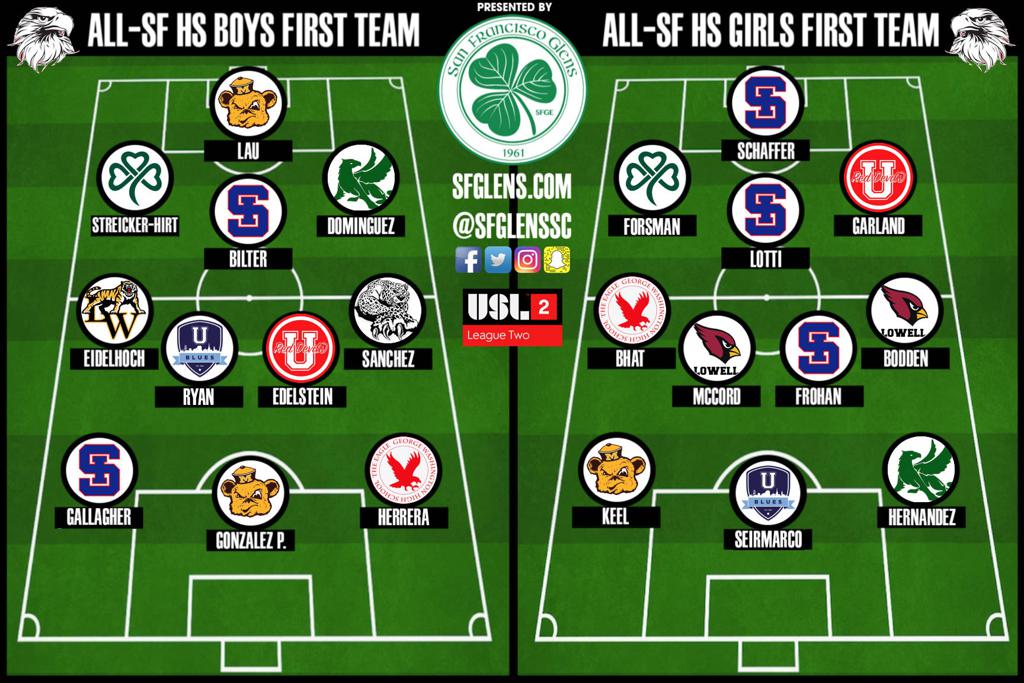 SF EXAMINER: A LOOK BACK AT
THE 2018-19 #ALLSFSOCCER FIRST
AND SECOND TEAMS

SF GLENS SOCCER CLUB: BUILD
A COMMUNITY FROM THE GROUND UP 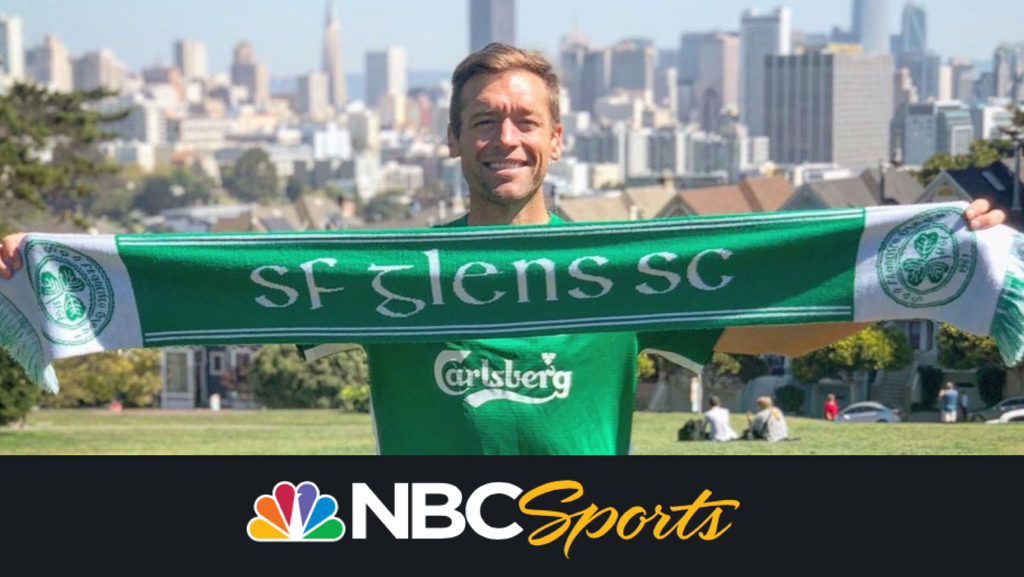 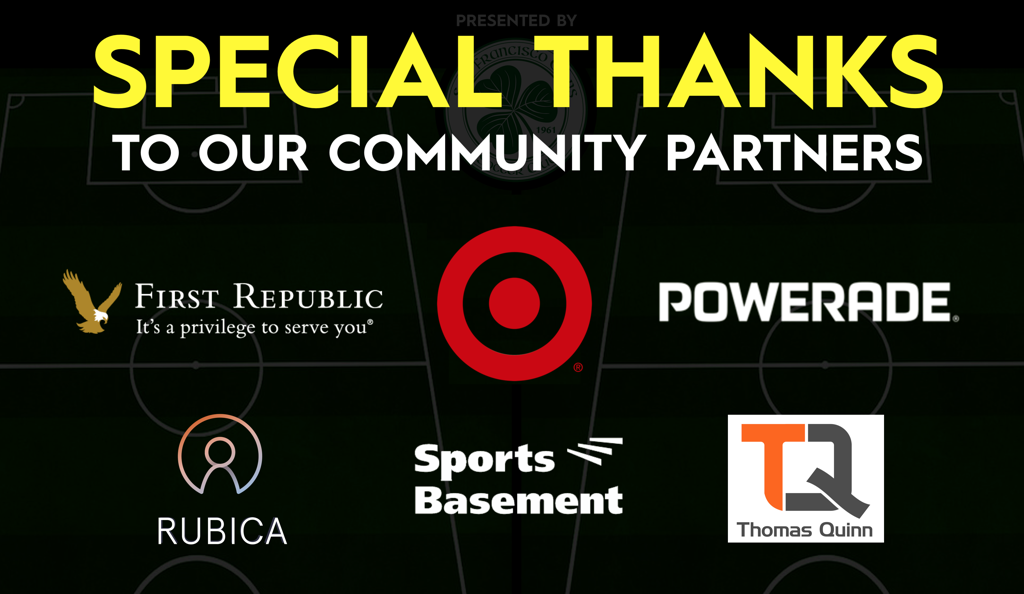 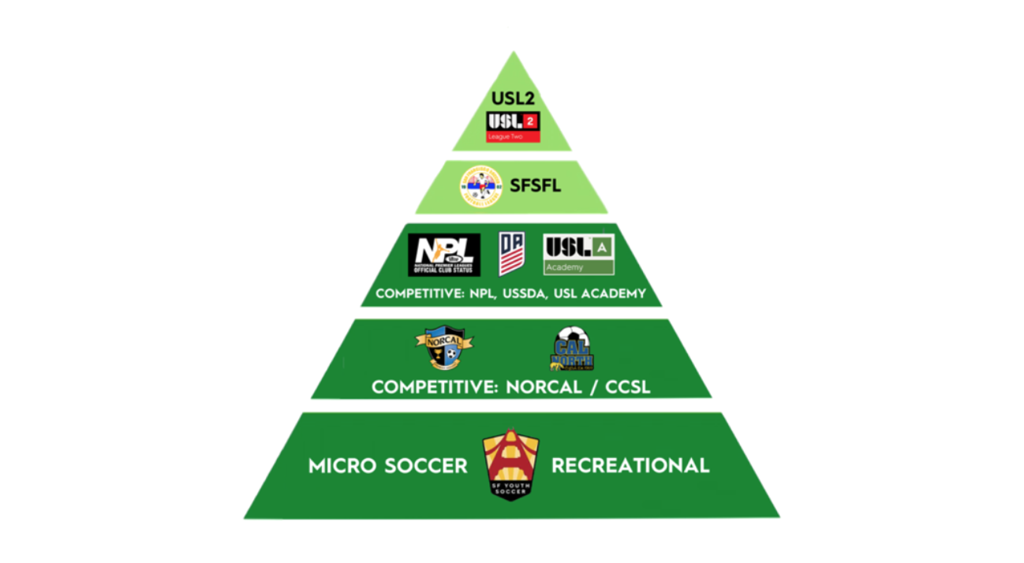