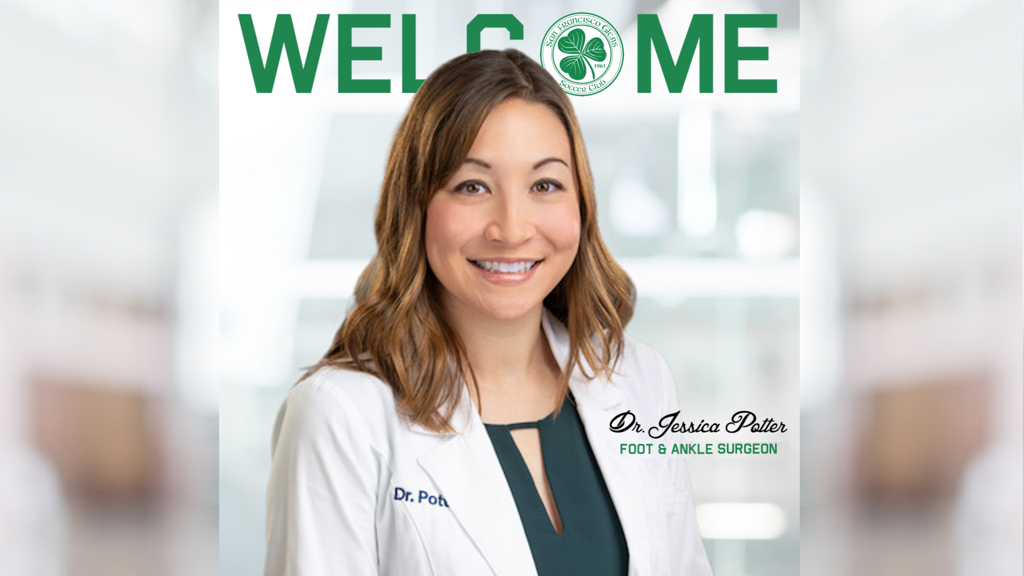 SAN FRANCISCO -- The San Francisco Glens are proud to announce the addition of Jessica Potter, DPM as the club’s official foot and ankle physician.

Dr. Potter specializes in sports medicine, reconstructive surgery, and trauma. She is board-qualified in Forefoot and Rearfoot Surgery with the American Board of Foot and Ankle Surgery and an Associate of the American College of Foot and Ankle Surgeons; she has performed over 1,500 surgical procedures. After attending her top-choice surgical residency program at Legacy Health/Kaiser Permanente in Portland, Oregon, she now practices with the Bay Area Foot Care group, with her main office at 1 Shrader Street in San Francisco.

"We're ecstatic that a surgeon of Dr. Potter's caliber wanted to work with our club," said SF Glens executive director Mike McNeill. "With the wealth of experience that she brings, not only in the medical field but as a former college athlete herself, we feel that she'll be a perfect fit to work with the diverse array of players on our pyramid, from the youth in our Glens Academy to the adults on our Senior Teams."

An accomplished athlete in her own right, Dr. Potter played four years of NCAA golf on scholarship at the University of San Francisco, where she obtained an undergraduate degree in Exercise and Sports Science with a Pre-Med minor. On the Hilltop, she was an All-West Coast Conference performer in addition to winning the Canadian Ladies Amateur to qualify for the LPGA’s Canadian Open. A native of Vancouver, British Columbia, she also competed on the Canadian Women’s National Team for two years prior to attending the California School of Podiatric Medicine. In 2018, Dr. Potter was inducted into USF’s Athletic Hall of Fame.

“I’m extremely excited to work with the SF Glens,” said Dr. Potter. “It’s a unique opportunity to be able to work with athletes through multiple stages of development to the professional level and I am honored to be a part of the organization.”

When she’s not in the office, Dr. Potter enjoys traveling, golfing, working out, and spending time with friends and family.

Originally founded in 1961 by the local Irish-American community as an amateur club in the historic SFSFL, the Glens are now open to all San Franciscans with the unique distinction of having youth and adult players from every zip code in The City.

Along with their youth academy—an MLS NEXT, USL Academy, and NPL member—the Glens are the largest soccer club in San Francisco with over 70 teams and 1,000 players at all levels of competition. The club’s complete Pathway Pyramid begins at the grassroots level with their Junior Glens micro soccer program and concludes at the top with their Senior First Team in USL League Two.

A part of the United Soccer League pyramid containing the USL Championship and USL League One above it and the new USL Academy beneath it, USL League Two is the top preprofessional league in the country, with an emphasis on the most promising Under-23 players in America.

Among the many players to have played in USL League Two before making their professional debuts include U.S. Men’s National Team members such as DeAndre Yedlin, Darlington Nagbe, Brad Guzan, Josh Sargent, Jordan Morris, and the Bay Area’s own Nick Lima and J.T. Marcinkowski.