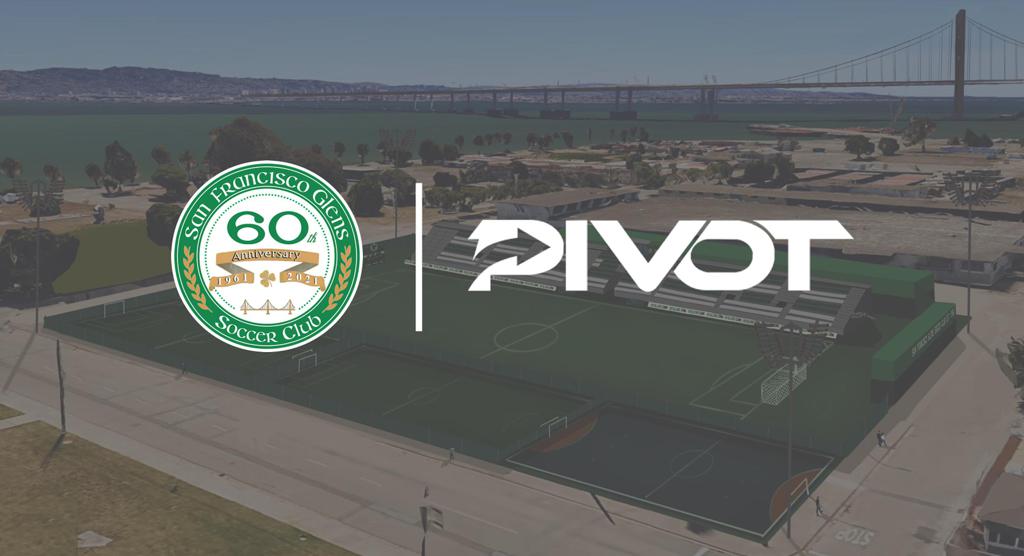 In this partnership, PIVOT will provide a multitude of services, including asset valuation through utilization of industry-leading brand research tools, identification of sponsorship opportunities via its existing network and experience, and leading term negotiations to maximize revenue. The principal objective will be to secure naming rights for the Glens’ landmark venue, which will be the first one constructed by a San Francisco club in The City’s 120 years of soccer history.

“We’re excited to enter this collaborative partnership with PIVOT, as we found it essential to bring on a world-class agency with the assets and experience to match the club’s rapid growth the past few years,” said Mike McNeill, SF Glens SC executive director.

Located on San Francisco’s historic Treasure Island, the facility is slated to feature a regulation-size turf pitch compliant with FIFA-certified standards for official games, higher-profile friendlies, and other events. It will also include room to build two smaller turf fields for training purposes, a community futsal court, and above all, an initial modular grandstand along the touchline with seating capacity for up to 1,500 fans to include among other amenities, a press box, lights, locker rooms, media room, office space, concessions, and clubhouse.

"PIVOT Agency understands the soccer ecosystem and the value and growth associated with the beautiful game,” said Ben Shapiro, founder and CEO of PIVOT Agency. “We're thrilled to partner with the San Francisco Glens and help integrate strategic corporate partners with this iconic waterfront complex.”

PIVOT is well versed in navigating the Bay Area market, counting the Golden State Warriors, San Francisco Giants, and San Jose Sharks among its current clients. The agency’s VP of Business Development, Brent Sasaki, will lead the Glens account. Prior to joining PIVOT, Sasaki was the VP of Corporate Partnerships at Sacramento Republic FC, where his team secured a multimillion dollar MLS jersey partnership with UC Davis Health three years prior to the Republic being awarded an MLS franchise and the naming rights for Papa Murphy’s Park.

With nearly 70 teams and over 1,000 youth and adult players, the San Francisco Glens are the largest and most diverse soccer club in The City. Founded in 1961, the Glens have preserved their grassroots origins while taking recent requisite steps toward building a professional club. Since 2018, they have established a first team in USL League Two that has sent six players to the MLS SuperDraft, as well as expanded their youth system with teams in MLS NEXT and USL Academy. As a community-focused 501(c)(3) nonprofit, the club’s youth wing is proud to have never turned away a single family due to financial hardship thanks to fundraising efforts and a scholarship program that distributed over $100,000 last year alone.

PIVOT Agency was founded in 2013 as a full service sports marketing agency, built at the nexus of brands and culture, and forming alliances between consumer brands, athletes, sports, the arts, causes, business and media. Today it has grown into four unique and successful divisions, encompassing Brand Representation, Property Sales, Team Travel and Tennis. By applying unparalleled expertise and data at precisely the right time and place, its team of industry leading executives have helped build PIVOT into a growing influence in the sports and entertainment business.

LOCAL/NATIONAL MEDIA COVERAGE ON OUR PROJECT