Rounding out the Senior Team pyramid of head coaches is Bill Chu, who will remain as director and gaffer of the Glens' second, third, and fourth teams in the historic SFSFL.

Conrad, head coach for the 2020 and 2021 seasons before the global pandemic caused the cancellation of both campaigns, will return to the same role he had in 2019. Meanwhile, Saucedo, who has served as assistant coach in 2018 and head associate coach the past three seasons, ascends into the top spot.

"We felt it was the right time for Gabe to take the helm," said Glens executive director Mike McNeill. "He's been a veteran of several USL League Two seasons as an assistant coach and knows what it takes to win in this league."

In addition to his time with the Glens, Saucedo has been the head coach at Skyline College since 2016 and has led the Trojans to several Top-20 finishes in the California JuCo polls. Several Skyline alumni have gone on to four-year programs, including current Glens defender Shayan Charalaghi, who recently graduated from USF after developing into a JuCo All-American under Saucedo's tutelage.

"I'm excited to be working with Jimmy and Mike and the rest of the coaches," said Saucedo as preseason training camp commenced at Skyline. "With the talented players we have coming in, and the others from tryouts, we think it's going to be a great season."

Conrad will oversee the USL League Two roster and remain on staff for trainings and games in support of Saucedo.

"I'm handing off the coaching duties to Gabe," Conrad said. "The team is in great hands and with the roster we're putting together, I'm looking forward to seeing what we can do this season now that we're finally back on the field."

Over in the SFSFL, Chu's three teams are coming off a wildly successful 2021-22 season after steering the second team to the SFSFL Premier Division semifinals for the first time in over a decade. Meanwhile the third team enjoyed a top-four finish in the Majors Division. In addition, the debutant Under-23 fourth team were champions of the SFSFL third tier.

"I like to keep it simple in three primary areas," said Chu. "Show up where you're supposed to at the right time, not too late or not too early, win the ball, and do something good with it."

The establishment of the USL League Two team has been beneficial to the SFSFL program as well.

"This integration has been fantastic," Chu added. We've been sending players up. Some of the players have come down. Some have played both in the SFSFL and USL League Two at the same time. ... They can transition between both leagues and I think that integration is a win-win-win for the players, the coaches, and the club."

As far as the first team goes, the Glens' USL League Two season commences on May 13th when they host defending Southwest Division champion FC Golden State Force at Skyline College. Information on all our teams can be found on SFGlens.com.

With over 70 teams and 1,000 youth and adult players, the San Francisco Glens are the largest and most diverse soccer club in The City. Founded in 1961, the Glens have established a minor-league team in USL League Two and expanded a comprehensive youth academy to include a full pathway in MLS NEXT, the top youth league in America, right down to local micro soccer programs serving kids as young as Pre-K. Last year, the club announced the construction of a soccer-specific facility at Treasure Island with a targeted completion date by end of 2022.

As a community-focused 501(c)(3) nonprofit organization, the Glens are proud to have never turned away a single player or family due to financial hardship thanks to internal fundraising efforts and a scholarship program that distributed over $150,000 last year alone. Visit us at sfglens.com. 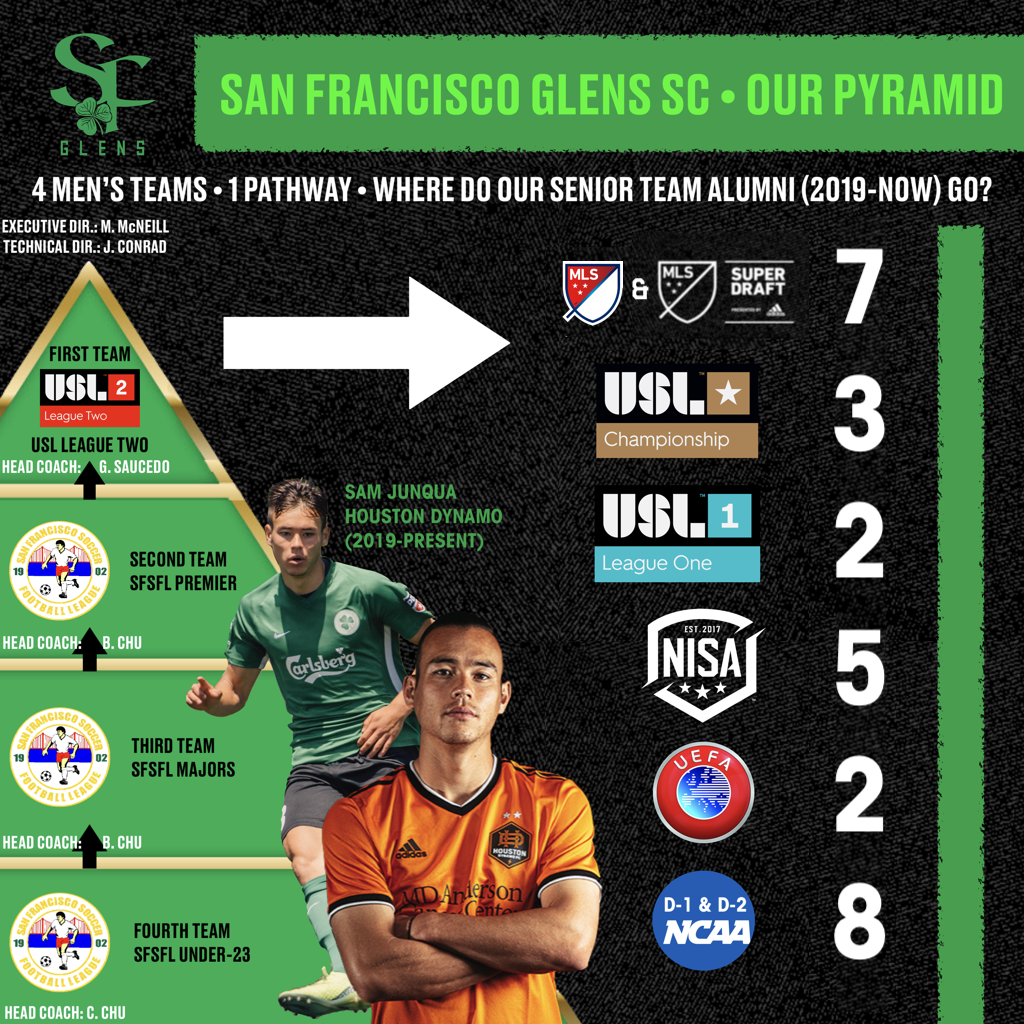