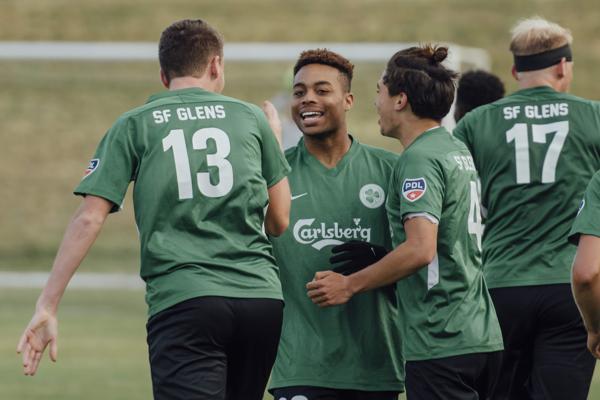 SAN FRANCISCO — For the San Francisco Glens’ first 248 minutes in the USL PDL, scoring seemed to be an exercise in futility.

But when they finally flicked on the switch, they did a lot more than keep the lights on.

Sparked by three second-half goals in the last 22 minutes, the Glens busted open a tight game and earned their first win in franchise history with a 3-0 triumph over LA Galaxy SD Zest.

The catalyst was Rajaee Delane, who earned Gilligan Development Man of the Match honors for his role in scoring San Francisco’s first goal of the season (68’) as well as assisting Adam Mickelson for the third and final score (90+3’). Sandwiched in between was the second goal by Spencer Held, which ironically enough was assisted by Mickelson.

Ayala-Hil unveiled a three-man back line, which debutants Roy Boateng and Marcus Nordgard patrolled with aplomb along with recent signee Sterling Hancock.

The new-look Glens will remain at Boxer Stadium for Saturday’s inaugural San Francisco Derby with SF City FC at 5PM. General admission tickets are $10 at the door. See sfglens.com/tickets for more details.

The addition of the San Francisco Glens’ PDL team is the latest evidence of the club’s growth. Along with the Glens’ youth club, SF Glens Evolution—a U.S. Soccer Development Academy member and official North American partner of Celtic FC’s Academy—the Glens are the largest soccer club in San Francisco, providing all levels of competition to nearly 1,500 youth and adult soccer players.

Carlsberg Play of the Game: The First Goal in Glens PDL Franchise History