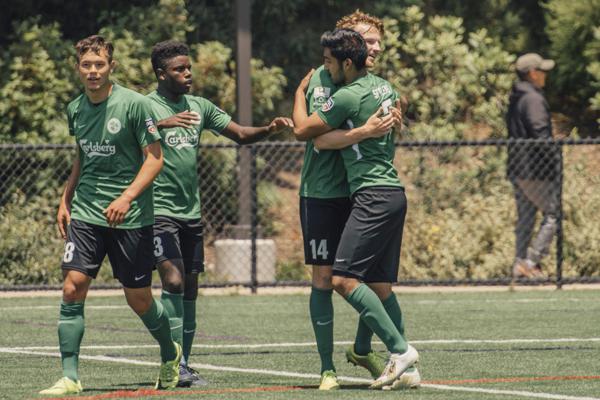 SAN FRANCISCO — For the third consecutive game, the San Francisco Glens scored first only to give up an equalizer mere minutes later.

Unlike the initial two instances, they would come away empty-handed Sunday as Orange County SC U23 added another goal to earn a narrow 2-1 victory at Beach Chalet.

Despite playing a home game outside Boxer Stadium for the first time this season, the Glens seemed to adjust early to the new confines. After Sam Junqua’s blast inside the box was deflected by OC goalkeeper Ruben Stuiver, Ranier Plantinos slotted home the rebound in the 17th minute. The San Francisco State product’s goal was named Carlsberg Play of the Game.

However, the lead was once again short-lived as Connor Gordon’s two goals in the 23rd and 36th minutes put the visitors ahead on the scoreboard. After relinquishing 1-0 leads vs. LA Galaxy San Diego Zest and Fresno FC U23 last week only to ultimately earn a draw and win, respectively, the Glens were not so lucky this time around.

When these two clubs met in Orange County last week, the Glens secured a 1-1 draw with a last-minute goal. The rematch was also marked with a furious final 10 minutes surrounding Stuiver's net, but the Glens could not replicate their success in San Francisco.

The result was a crucial one for both sides as sole possession of fourth place in the USL PDL Southwest Division was on the line. With the top two in the table in the playoff hunt and the top three historically offered Open Cup berths for next season, San Francisco’s margin of error is razor-thin now.

The Glens return to Boxer Stadium on Sunday, July 1, at 1 p.m. against the first-place FC Golden State Force. All First Responders and Military will enjoy free admission. After the Glens’ game with the Force, the SFPD Soccer Club will take the field against an opponent TBD.

Season tickets and single-game tickets are available at sfglens.com/tickets.