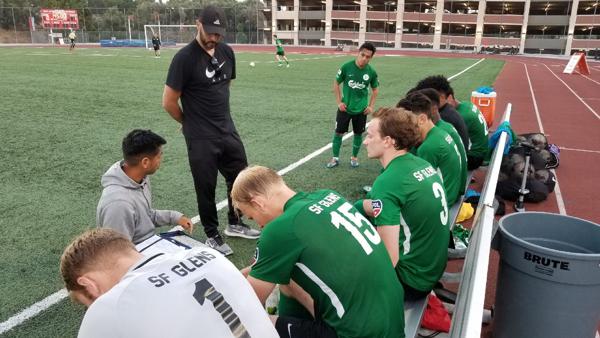 LA MIRADA, California — The San Francisco Glens have no problem taking leads in games this season. Holding onto them is another story.

After darting out to an early advantage for the fourth straight game, the Glens could not sustain it, conceding two second-half goals to fall 2-1 to the SoCal Seahorses at Al Barbour Field.

In the third minute, Arda Bulut found fellow forward Tawwab Emiola in the box and the latter scored his second goal of the season to put the Glens up 1-0. The lead would vanish in the 54th minute, when Malik Shaheed’s dynamic dribbling and subsequent finish equalized for the Seahorses.

The two teams remained deadlocked until the 92nd minute, when the hosts would score the game-winner after a last-second free kick.

The Glens have dropped their second straight contest and are now facing a must-win game Sunday at Ventura College against the Ventura County Fusion. Kickoff is at 7 p.m.

Join us on Sunday, July 1 at 1 p.m. for your the Glens’ return home vs. league leader FC Golden State Force. The game will take place at Boxer Stadium in Balboa Park. You can park next door at City College (358 Havelock St.) for $3.

All First Responders and Military will enjoy free admission. After the Glens’ game, the SFPD Soccer Club will play on the field against a team to be announced later.

Remember, all fans 17 and under are free to ALL SF Glens PDL home games with their Season Youth Pass! You can order yours or purchase General Admission tickets online at sfglens.com/tickets.