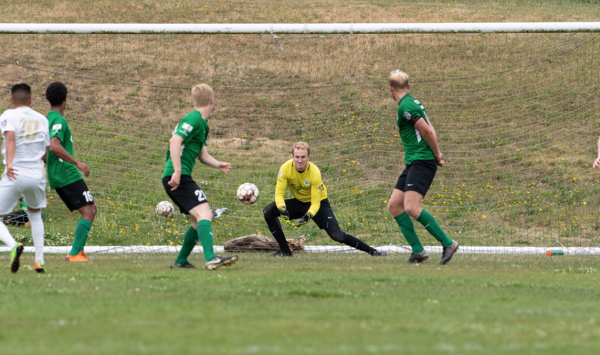 Kevin Peach collects one of his six saves on the day. (Lyndsay Radnedge/Center Line Soccer)

SAN FRANCISCO — On paper, the odds were on FC Golden State Force coming into Boxer Stadium on Sunday afternoon and continuing their relatively unimpeded march through the USL PDL Southwest Division.

However, games are decided on the field, and despite entering the game on a three-game losing streak, the San Francisco Glens put together one of their best defensive performances of the season to hold the visitors to a 0-0 draw.

Goalkeeper Kevin Peach recorded six saves on the day, including a double stop in the 50th minute that had the crowd on its feet in appreciation and was later named Carlsberg Play of the Game. Peach, who was named Man of the Match presented by Marina McBrearty Acupuncture, was aided by a back four that refused to concede many open shots.

As the second half progressed, the Glens’ attack began to emerge on the wings, with Rei Dorwart and Diego Lopez causing the Force defense fits. In the 57th minute, SF midfielder Shinya Kadono almost scored off a rebound but lifted his shot over the crossbar. Ten minutes later, Glens midfielder Sam Junqua attempted a low shot from the edge of the box that was headed toward the net but was tipped away to force a corner kick.

The Force amassed one last assault in the final five minutes, but once again, Peach was on the case, saving two shots including a dangerous low roller in the 85th minute to ensure both teams would split the points.

Next Game on Friday

The Glens return to Boxer Stadium on Friday, July 6, when they take on the SoCal Seahorses at 5:30pm. All college students will enjoy free admission with ID. In the first meeting between the two teams, SF took an early lead before conceding the game-winner in the final moments of the game to fall 2-1. This time, the Glens hope to reverse the result on their home field.