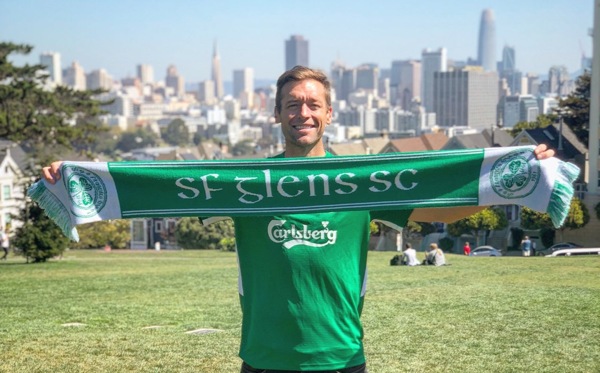 SAN FRANCISCO – Jimmy Conrad, one of the most recognized and recognizable players in U.S. Soccer history, has agreed to become the new technical director and associate head coach of San Francisco Glens Soccer Club.

As a player, Conrad earned 28 caps with the U.S. Men’s National Team from 2005 through 2010 and helped anchor the back line as a starter in the 2006 FIFA World Cup. On the club level, he played 13 seasons in Major League Soccer for the San Jose Earthquakes, Sporting Kansas City, and Chivas USA, earning the MLS Defender of the Year award in 2005, the MLS Humanitarian of the Year award in 2009, and MLS Best XI honors four times. He was also selected to appear in six MLS All-Star Games.

Conrad’s teams have won at every level; he retired in 2011 as one of a select few American players to have won a CONCACAF Gold Cup, an MLS Cup, a U.S. Open Cup, an NCAA National Championship, and an Under-20 Club Championship. Now he aims to replicate the feat with the Glens in the USL Premier Development League (PDL).

“The addition of Jimmy Conrad to our staff speaks volumes about our leadership role in the San Francisco soccer community and our club’s desire to provide the best experience possible for our players, from the PDL team on down,” SF Glens SC team president/general manager J. Ramon Estevez said. “What I’m most excited about, however, is for players and fans to experience his passion for the game. Jimmy’s experience, along with [head coach] Javier Ayala-Hil, will provide the ultimate developmental environment for players looking to play at the highest levels, be it college, professional, or internationally.”

The team will hold a press conference Thursday, Sept. 27 at 7 p.m. in San Francisco’s United Irish Cultural Center to formally present Conrad as a member of the Glens’ front office. The event is open to the public, and Conrad will be available for questions. More information can be found below.

“I’ve always wanted to have a voice in the development of the game in this country, and after understanding what the Glens stand for and what they want to do, I decided that they’re creating a culture that I want to be a part of,” said Conrad, who also possesses a USSF B Coaching License. “They’ve started from the ground up with their youth club and have now built this PDL team with ambitions of getting bigger. From Ramon to [executive director of football] Mike McNeill to Javier, these are guys who put the game first and who see the game the same way I do, so having another set of experienced eyes in the organization should only help to strengthen what they are doing.”

One of Conrad’s defining hallmarks as a player was his ability as a leader and mentor for others; he wore the captain’s armband for the United States during the 2009 Gold Cup, for the MLS All-Stars in their 2008 win over West Ham United, and for four seasons at Sporting KC, then known as the Kansas City Wizards.

“I believe that adding Jimmy reinforces our ambitions as a club,” said Mike McNeill, executive director of SF Glens Evolution, the Glens’ youth academy. With more than 70 teams and over 1,000 players, SFGE is San Francisco’s largest club and the feeder system for the PDL first team. “Jimmy has already been to a number of youth practices and games, providing valuable feedback to our players and coaches. He shares the same vision for the makeup of the first team as we do. Having like-minded individuals involved in the club, along with the great coaching staff that we have in the youth system, make the Glens the ideal option for player development in San Francisco.”

“It’s easy to get excited when someone wants to be involved in an organization with the pedigree of Jimmy,” said Joel Nash, vice president of the PDL, which is in the United Soccer League (USL) network. “Jimmy has shown a real commitment to furthering the Glens’ community and soccer impact. This gives the PDL so much appreciation for the Glens and Jimmy as they forge toward enhancing the game both to their supporters and the community of San Francisco. I wish Jimmy all the best in this exciting role!”

A Southern California native, Conrad now resides in Marin County with his wife, Lyndsey, and two daughters. Before joining the Glens, his post-playing career media presence has grown exponentially.  In addition to his latest roles as a correspondent for BeIN Sports and as a brand ambassador for AT&T, Conrad collaborates regularly with EA Sports, Red Bull, Puma, and other companies that believe in the sport as much as he does.

About Next Thursday’s Press Conference

The Glens will formally announce Jimmy Conrad as their new technical director and associate head coach on Thursday, Sept. 27 at 7 p.m. in the St. Francis Room of San Francisco’s United Irish Cultural Center. The address is 2700 45th Avenue, and the event is open to the public. Limited merchandise will be on sale.

For those unable to attend in person, the Glens are planning to broadcast the press conference via stream on Facebook and Instagram Live.

For more information or media requests, please contact our Director of Communications Ryan Maquiñana at ryan@sfglens.com.

Originally founded in 1961 by Dr. Michael McFadden, the Glens have been a mainstay in the Irish-American community and the San Francisco soccer landscape for decades, winning numerous amateur titles in the historic San Francisco Soccer Football League and competing for national titles throughout the ’70s, ’80s, and ’90s.

The addition of the San Francisco Glens’ PDL team in 2018 to the top of the club’s pyramid is the latest evidence of their growth on the path to the professional ranks. Along with their youth club, SF Glens Evolution—a U.S. Soccer Development Academy member—the Glens are the largest soccer club in San Francisco, providing all levels of competition to over 70 teams and 1,300 youth and adult soccer players.

A part of the United Soccer Leagues, which also operates the Division II USL, the newly-announced USL Division III, and Super Y-League, the USL Premier Development League (PDL) has served as the proven stepping-stone for aspiring professionals.