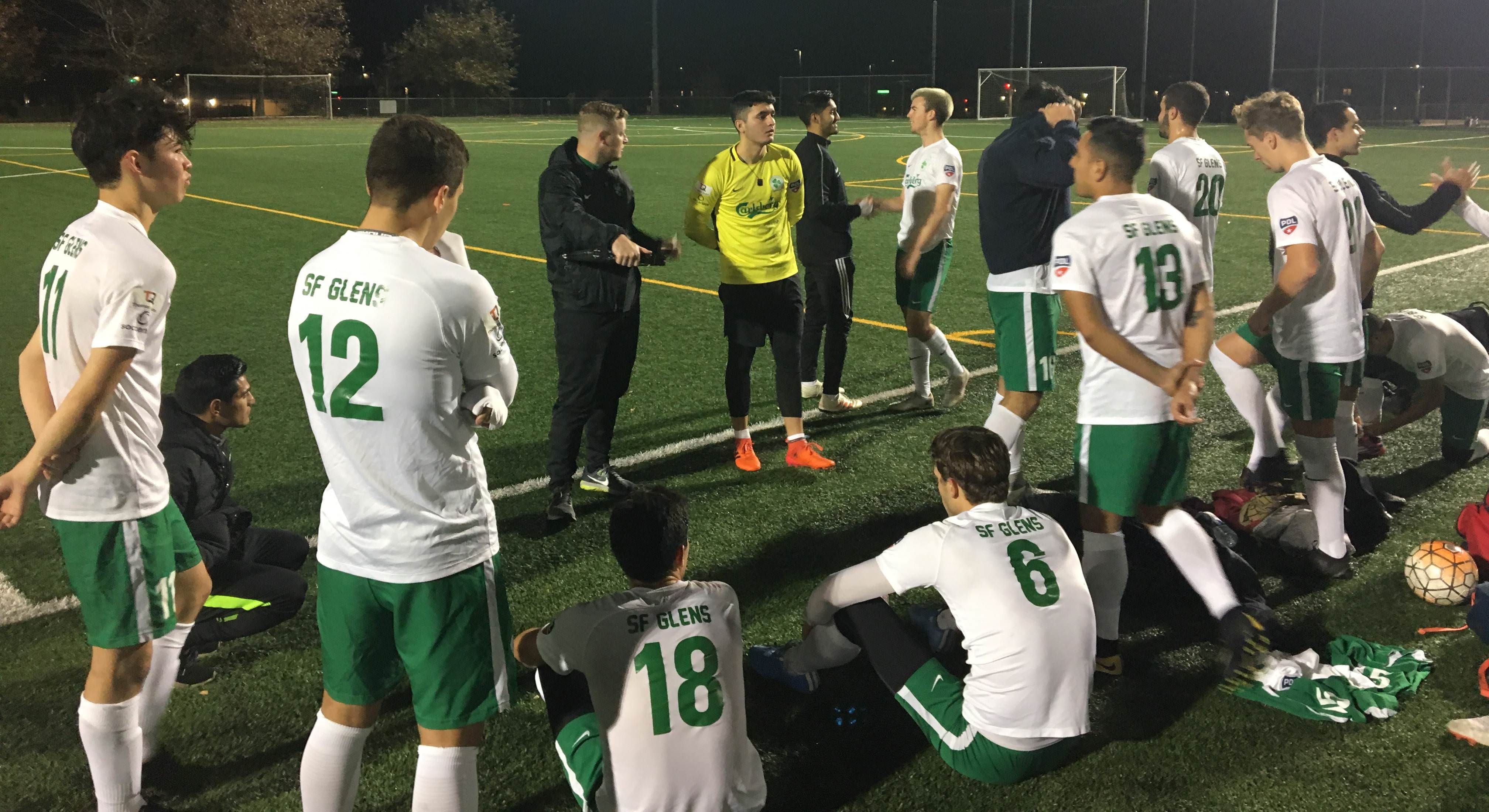 DUBLIN, California — Ranier Plantinos scored two of his three goals in the first half as the San Francisco Glens coasted to a 6-0 win over CD Aguiluchos USA on Saturday night at Fallon Sports Park.

The result concluded group stage play in Copa NorCal and secured a spot for the Glens in quarterfinals, which will take place on January 23 at a venue to be determined against an unnamed opponent.

After conceding five goals to open the group stage, San Francisco has scored the last 11 without response. Against Aguiluchos, Plantinos was the protagonist, but he wasn't the only Glen to light up the scoreboard.

Sebastien Das, Gabe Silveira, and Tariq Pulskamp also added to their accounts as the game was never in doubt after the Green and White raced out to a 4-0 halftime lead.

Coach Mike McNeill utilized the wide margin to give a trio of Glens Evolution youth players—Wesley Matcovich, Pete Lesperance, and Taye Martins—some major minutes with the first team. Isaac Alvarez made his debut in goal for the Glens, but was rarely tested as he promptly earned the clean sheet.

"It's great to make the quarterfinals," Plantinos said. "But with the holidays coming up, we have to stay ready, stay in shape, and train together in the meantime."

Originally founded in 1961 by the Irish-American community, the Glens have been a mainstay of the San Francisco soccer landscape for decades, winning numerous amateur titles in the historic San Francisco Soccer Football League and competing for national titles throughout the ‘70s, ‘80s, and ‘90s.

The addition of the San Francisco Glens’ USL League Two team in 2018 to the top of the club’s pyramid is the latest evidence of growth on their path to the professional ranks. Along with their youth club, SF Glens Evolution—a U.S. Soccer Development Academy member—the Glens are the largest soccer club in San Francisco, providing all levels of competition to over 70 teams and 1,300 youth and adult soccer players.

Over 70 percent of all MLS SuperDraft selections since 2010 have USL League Two experience, including a total of 66 alums chosen in 2018. Among the many players to have played in USL League Two before making their professional debuts include Newcastle United FC defender DeAndre Yedlin, 2017 MLS Goalkeeper of the Year Tim Melia, 2017 MLS Defender of the Year Ike Opara, 2018 MLS Rookie of the Year Corey Baird, and U.S. Men’s National Team members such as Darlington Nagbe, Brad Guzan, Geoff Cameron, Josh Sargent, and the Bay Area’s own Nick Lima.