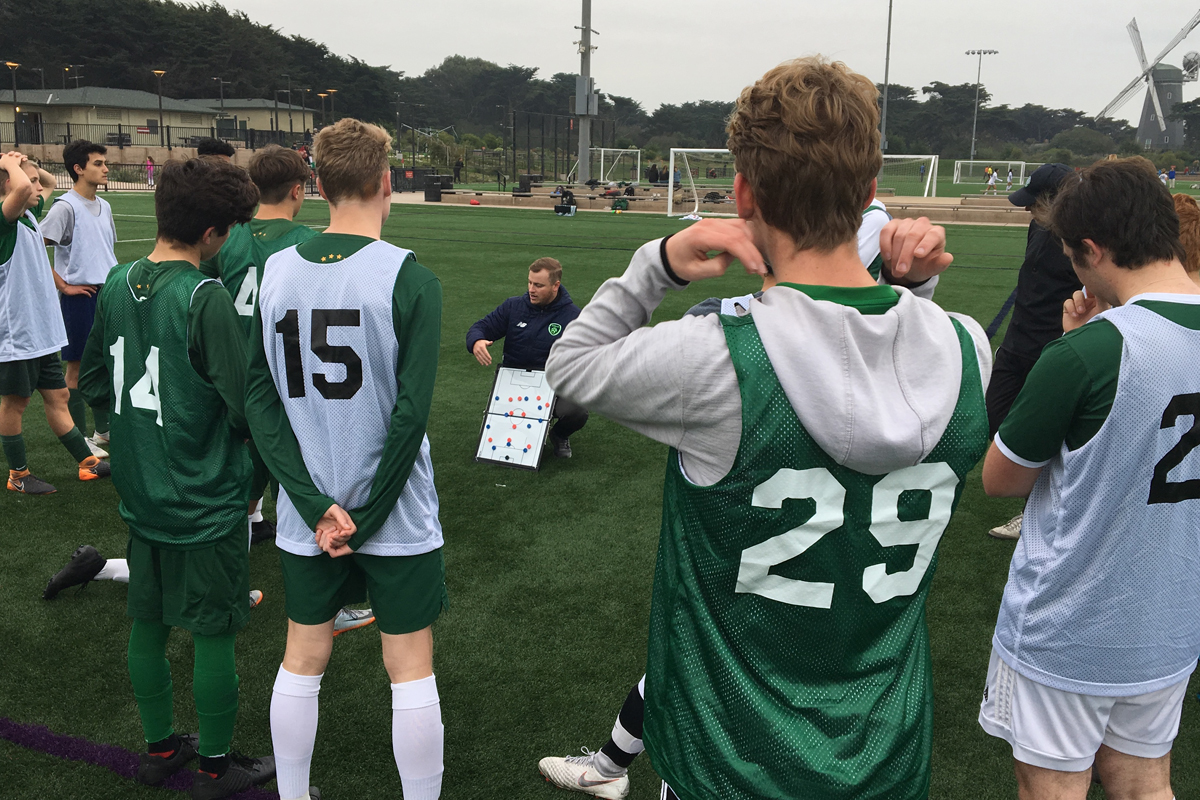 The San Francisco Glens Soccer Club of USL League Two are proud to partner with the Examiner in featuring a different boys’ or girls’ high school soccer team in San Francisco every Sunday.

The winter wind and fog permeate Ocean Beach with dogged constancy, piercing and enveloping passersby who dare to step outside sans layered attire.

A stone’s throw away at the Beach Chalet Soccer Fields, Sacred Heart Cathedral boys’ and girls’ varsity teams apply the same unforgivingly effective approach to the game — even in practice.

“We’re a blue-collar program. We fight for every inch on the field,” said girls’ head coach Chris King.

“It doesn’t matter who we’re playing. We work hard with the ball and even harder without it,” McNeill said.

During the 2017-18 season, the Fightin’ Irish delivered dual knockout blows by sweeping both the boys’ and girls’ Central Coast Section Division II titles. However, while King is back for his fifth season, McNeill has only recently taken the reins from Jeff Wilson, now the women’s head coach at City College of San Francisco.

“It’s my first year at S.H., but the soccer community in the City is small,” said McNeill, a goalkeeper during his days at San Francisco State. “I know a lot of these players, and I’ve even coached many of them myself in the past.”

If any candidate were best equipped for such a transition, it’s McNeill. No less than nine members of the roster play club soccer for San Francisco Glens Evolution, the largest youth club in the City where McNeill also serves as the Director of Football.

“He coached my brother with the Glens, so I knew what to expect,” said senior forward Tommy Cooper of the new man in charge.

Though McNeill and assistants Danny Kirkland and Paul Pasquariello have brought their own brand of soccer to the Irish, one aspect of the team’s style of play will enjoy continuity: organized defense. Whether it’s all-league senior defender Alec Perliss or a goal scorer like Cooper, the objective is to collectively force turnovers and start counter-attacks.

“When you play for [McNeill], you have to play with a certain hunger,” said sophomore midfielder/winger Diego Grande, who, combined with Declan O’Flynn, scored a combined 32 goals for the freshman team last season. “We’re human so mistakes happen, but if you push through for 90 minutes and keep your foot on the gas pedal, you’ll be successful.”

This youthful exuberance will be vital if they stand a chance of both repeating as CCS champions and dethroning archrival St. Ignatius for supremacy in the West Catholic Athletic League.

“Every game in this league is a challenge,” said McNeill, whose team started 2-2. “It looks like it’ll be a dogfight between five or six teams. Our goal is to contend in WCAL and win another CCS championship.”

On the girls’ side, King and assistant Jorge Calderon aim to recapture the magic that led to last season’s playoff run. After an eight-game winless streak in the middle of the campaign, the team reeled off six straight victories that yielded a CCS title of their own and a spot in the NorCal Division III final, where they ultimately fell 1-0 to Cardinal Newman.

The momentum doesn’t appear to have faded, as the Irish raced out to a 6-1-1 start despite playing seven of eight games on the road.

“We rely on the ‘next woman up’ mentality,” King said. “We employ players out of position if necessary because they’re willing to push their limits and do whatever it takes to win, especially on defense.”

“I feel really confident with her in the back,” Dudum said of La Rocca. “Even if I lose a player I’m [marking], she always comes in to get [the ball] out of there.”

The senior reciprocated the praise: “Evalani joined us as a freshman last year, and her talent was obvious, but also how she sacrifices herself for the team,” La Rocca said. “We have to high press more than other teams, but we have the heart to beat their intensity. That’s how we’re trained.”

Up front, leading scorer Maggie Altman and Pacific-bound Rhea Chan add the punch in attack. With an even more complete squad in 2018-19, the Irish have vowed to answer the bell for another postseason march.

“The WCAL has so much [NCAA] Division I-level talent,” said King, who doubles as the head women’s coach for the Academy of Art. “It’s a little more wide-open than before, so finishing in the top-half would be great. From there, we’d love to go back to NorCal, keep fighting, and make another run.”

The SF Glens are entering their second USL2 season at Boxer Stadium, featuring the best college talent in the Bay Area and ex-U.S. National Team captain Jimmy Conrad as new technical director. Learn more at SFGlens.com or follow them on Facebook, Twitter, and Instagram @SFGlensSC.

You can read the original article on SFExaminer.com.